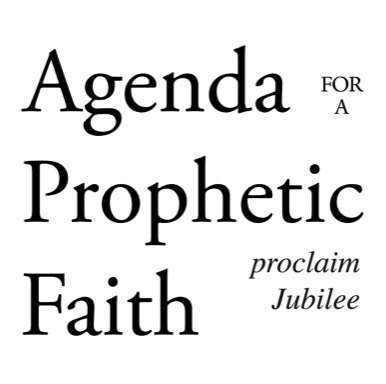 This photo of Pope Francis I was cropped for casarosada.gob.ar by César from a photo which included Cristina Fernandez de Kirchner and is published under “Commons Attribution-ShareAlike 2.0”

By proclamation of Pope Francis, 2016 is to be a Year of Jubilee, in honor of the 50th anniversary of Vatican II. What is the meaning of this gesture on the Pope’s part?

In biblical times, once every seven years, debts were to be forgiven, slaves freed, and the land allowed to lie fallow. Furthermore, every 49 years, land that had been alienated from its original owners was to be returned to its families of origin.

The intent of this ancient legislation seems to have been to radically equalize the conditions for life to flourish in terms of the land tenure and productive systems then in place. But whether, and to what extent, such regulations were ever put into practice remains a question, as does what they might mean for us in our very different economic, social, and political conditions.

The very existence of these regulations in the Hebrew scriptures, however, raises a thought-provoking question for all persons of faith: what would happen if, in the spirit of the Jubilee, we were to give serious consideration about how to renew the conditions for life to flourish, not just among the marginal and threatened sectors of our population, but for the land and the creatures as well--all the residents of what the Pope calls “our conmon home”?

Author, Christ Actually: The Son of God for the Secular Age

Pope Francis, Laudato Si’, and the Flourishing of Creation

It may very well be that the most significant political happening of 2015 was the appearance of a Roman Catholic Pope on the world stage with a message for all people of good will. In his appearance before Congress, in his encyclical Laudato Sí, and in his call for 2016 to be a Year of Jubilee Pope Francis may have provided just the push needed for Americans — always slow to respond to developing crises — to rise to the occasion and confront the implications of global warming — not only for its impact on the creation, but also on the poor and marginal peoples of the world. James Carroll will address the potential impact of this encyclical for both the church and the world.

Understanding the Biblical Jubilee for our Time

According to the biblical text, in ancient Israel the Jubilee tradition and the Sabbath regulations to which it was related meant this: every seven years slaves were to be freed, debts to be forgiven, and the land allowed to lie fallow, and every 49 years, land that had been alienated from its original owners was to be returned to its families of origin.
Skeptics argue that the Jubilee tradition was, and is, a utopian ideal — and that it would be difficult, if not impossible, to put into practice.
But on deeper reflection, it could be argued that the Jubilee tradition involves a deep wisdom about the practical realities of human life which we today, in our 21st century setting, ignore at our peril.
Therefore, a question is raised for all people of good will: what would happen if, in the spirit of the Jubilee, we were to give serious consideration about how to renew the conditions for life to flourish — not just among the marginal and threatened sectors of our population, but for the land and the creatures as well —for all the members of what Pope Francis calls “Our Common Home”? Rabbi Waskow will lead us in these reflections.

Chair of Death Penalty Focus and Bend the Arc: A Jewish Partnership for Justice

Like much of the rest of our political system, the legal system has become corrupted and is badly in need of reform. To take only one example, there are more persons in prison in the United States than in any other developed country in the world, and our way of treating these prisoners, while they are in prison and after they have been released, is deeply flawed and inhumane.
Stephen Rohde, Chair of Death Penalty Focus and Bend the Arc: A Jewish Partnership for Justice, will suggest for us a program of prison reform that more closely aligns with the Judeo-Christian tradition.
A constitutional lawyer, lecturer, and political activist, Rohde is a much-in-demand speaker and writer for the Los Angeles Daily Journal and the Los Angeles Review of Books.

Visionary and Founder of the Oberlin Project <oberlinproject.org> and “Counselor to the President” at Oberlin College and Conservatory

Featured in the PBS video, “When Heaven Meets Earth,” about the plight of the Chesapeake Bay watermen

Today's young adults —especially those emerging from what used to be called the "working class" — don't appear to have much of a future. Many come from disrupted families of origin, have a difficult time within the educational and legal systems, and perhaps most importantly, suffer from disastrously high rates of unemployment. The American dream of a productive marriage, family, and working life would seem to be beyond their reach. What might be done to “renew the conditions for life to flourish” for this neglected part of our population?
But there is much that can be done to remedy the situation in the here and now, as our Agenda speaker, Dr. Susan Emmerich, is showing with her "Operation 3000" project in the old working class town of Kankakee, Illinois.

Author, God Revised: How Religion Must Evolve in a Scientific Age

Redeeming American Politics Through a Return to Gratitude

It is no secret that American politics has fallen on hard times, so much so that it raises the question about the functionality of a democracy in difficult times. According to theologian Galen Guengerich, what is needed in our common life is a return to a spirit of gratitude — for what we’ve been given, and for the multiple opportunities to work together on common problems where our difference might add strength rather than weakness to our deliberations.

A Prophet ‘…is a person who knows what time it is.’
Rabbi Abraham Joshua Heschel

For online ticket sales and more details, drop down the menu link above right or go directly to Eventbrite.
(If you are using a smartphone or tablet you way want to download the Eventbrite or Eventbrite Neon App. Then search for “Proclaim Jubilee!”)

is a program of

This page was last updated on GMT